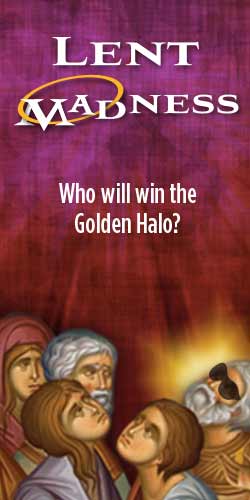 This Lent 32 saints will battle it out for the golden halo. Seven celebrity bloggers and I (as a token Southern Hemisphere blogger) are going to be the panel while you do the voting!

It’s a bit of fun with your fasting.

Lent Madness began in 2010 as the brainchild of the Rev. Tim Schenck. 32 saints are placed into a tournament-like single elimination bracket. People vote for their favourite saint. 16 saints make it to the Round of the Saintly Sixteen; eight advance to the Round of the Elite Eight; four make it to the Final Four; two to the Championship; and the winner is awarded the coveted Golden Halo. The first round consists of basic biographical information about each of the 32 saints. Things get a bit more interesting in the subsequent rounds as we offer quotes and quirks, explore legends, and even move into the area of saintly kitsch.