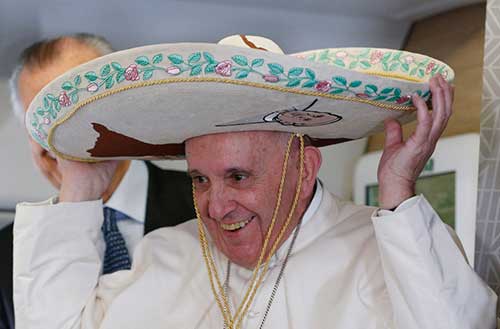 Pope Francis has put the teleological cat amongst the deontological pigeons. If you are not interested in what is right and what is wrong – don’t read on. If you are, and the words in italics are not clear to you, read on: all will be clear by the end of the post. I hope.

Natural Law, a usual way for Roman Catholics to make ethical decisions, draws on the philosophy of Aristotle. Natural Law is a deontological ethical-decision-making theory; that means it is not concerned with consequences of actions, but an action is good (in and of itself – without reference to guessed consequences) when it conforms to the intention seen in creation.

Humanae vitae is the 1968 definitive teaching on the use of contraceptives by Pope Paul VI. If you are of the opinion that Humanae vitae is infallible (note, that would be your fallible opinion) then that sort of ends discussion. The only odd thing being that the document Humanae vitae itself certainly is presents itself at arriving at its conclusions by logic rather than by Divine Revelation. The logical track it follows is the Natural Law path. That the theologians and bishops on the Pontifical Commission on Birth Control established by Paul VI’s predecessor, Pope John XXIII, (and which Paul VI had expanded) arrived at an opposing conclusion to Paul VI’s would point to discussion being open within the Natural Law framework.

Now to the “Principle of Double Effect”. This is an ethical decision-making principle within the “Natural Law” ethical system and integral within the approach. Natural Law, remember, is not a consequentialist system – it is concerned with an action being right or wrong in and of itself; not with the consequences of the action. So the Principle of Double Effect means you do a right action, but there is a result that your action did not have as the primary intention of achieving. And that is fine.

During the press conference on Pope Francis’ flight home from Mexico, he was asked by a reporter about the threat of Zika in many Latin-American countries.

Paloma García Ovejero, Cadena COPE (Spain): Holy Father, for several weeks there’s been a lot of concern in many Latin American countries but also in Europe regarding the Zika virus. The greatest risk would be for pregnant women. There is anguish. Some authorities have proposed abortion, or else to avoiding pregnancy. As regards avoiding pregnancy, on this issue, can the Church take into consideration the concept of “the lesser of two evils?”

Pope Francis: Abortion is not the lesser of two evils. It is a crime. It is to throw someone out in order to save another. That’s what the Mafia does. It is a crime, an absolute evil. On the ‘lesser evil,’ avoiding pregnancy, we are speaking in terms of the conflict between the fifth and sixth commandment. Paul VI, a great man, in a difficult situation in Africa, permitted nuns to use contraceptives in cases of rape…avoiding pregnancy is not an absolute evil. In certain cases, as in this one, or in the one I mentioned of Blessed Paul VI, it was clear. I would also urge doctors to do their utmost to find vaccines against these two mosquitoes that carry this disease. This needs to be worked on.

A lot of energy has been expended on disputing the accuracy of the Paul VI story. The story seems to have grown from a conjectural piece in a scholarly article. But I want to underline that Pope Francis (following the question) is not using the Principle of Double Effect at all. These examples are about making ethical decisions based on possible outcomes of actions – what is called a “teleological” (consequentialist) ethical theory.

This approach is called “Proportionalism”, a consequentialist attempt to develop the Natural Law approach. One would have firm moral rules, but take circumstances and intentions into account in deciding on the nature of an act. For example, an act which may appear to be lying (“no there are no rebels being hidden in this house”) is recognised as being more complex to define if there is a proportionate reason which would justify this (these innocent people I am hiding would be killed if discovered). This means that an action may appear to be objectively wrong but is actually morally right, and another action may be objectively right but morally wrong. A person may have a good intention (keeping the innocent rebels alive) but may be able to achieve that intention only through an act which is considered to be, in itself, evil (lying).

Interested readers could explore Pope John Paul II’s encyclicals Veritatis Splendor 1993 (especially section 75), and Evangelium Vitae 1995 (68) where he censures Proportionalism but promotes ethics founded on the object of the act (finis operis), the intention of the person performing the act (finis operantis), and the circumstances surrounding the action.

Whether the African nuns story is historically correct or not is a distraction. Pope Francis clearly follows an ethical theory that moves from the purely deontological into the clearly teleological. If systematised, this could be foundational to significant shifts.

10 thoughts on “Pope Muddies the Principle of Double Effect?”