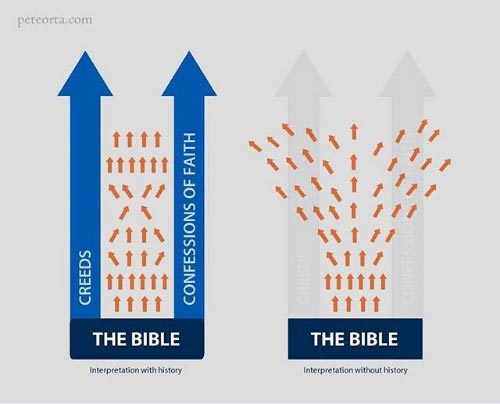 At the time of the Protestant equivalent of canonisation at the death of Billy Graham, some others are highlighting how (t)his individualistic, Bible-alone approach led to ignoring of social and environmental reform and a political approach that inevitably resulted in the election of Donald Trump and the triumph of the approach of that end of the spectrum. [See, for example, here and here].

There is a common refrain that “sola” does not mean “solo” – but generally that is from those who are convinced that they alone are the sole correct interpreters of “Bible alone” (I hope you saw what I did there!).

Certainly, one can discern a different nuance to “Bible alone” on one side of the (Atlantic) ditch to the other. But, no matter.

The image that “tradition” (including creeds and confessions) is somehow simply derived from the Bible and thereafter stems the dispersion of Christian understanding, retaining it in some sort of acceptable bandwidth is philosophically, historically, and contemporarily unsustainable with honesty.

And if “sola scriptura” means that all tradition (including creeds and confessions) is ultimately subject to the interpretation of the scriptures, then there is, in effect, no real difference, ultimately, between sola and solo scriptura – and no assurance that the arrows on the left (in the picture above) are not doing exactly the same as those on the right.

The fantasy that the tradition from Jesus was passed on until it was written up, and only until it was written up in the New Testament, and that from the moment of the production of that collection of 27 scrolls, suddenly tradition (including creeds and confessions) became a reflection only upon what was contained in those 27 scrolls, is precisely that: pure fantasy.

The manner of baptising and the manner of praying to consecrate the bread and wine at communion spring immediately to mind. The sola/solo scriptura crowd will press that because it is not clarified in those 27 scrolls therefore it is less important – “second” and “third-order doctrines” some of them call it. I can just imagine early-church Christians balking at such a suggestion. Quite the opposite could/would be true – precisely because of the presumption that this is how one does things, no one bothered to write it down in those 27 scrolls!

And so I’m sure many of us have sat through sola/solo-scriptura communion services where reading 1 Cor 11:23b-25 somehow magically consecrates the bread and wine. Such an action would certainly have been unthinkable in the early church.

Yes – as with everything – aberrations crept into liturgy, but its reform and renewal wasn’t achieved, wouldn’t have been able to be achieved, simply by reference to the Bible alone; nor to some sort of (early) reflections on the Bible alone. We accessed the tradition through early liturgical writings. The ecumenical, international, and scholarly consensus on the shape of the Eucharistic Prayer derives from the study of early (extra-biblical) liturgy.

A more sensible picture would be:

The Bible was composed within the tradition. It is recognised as having its authority within that tradition. It continues within the life of that ongoing tradition. Certainly, tradition cannot develop in conflict with the thrust and trajectory of the scriptures – that would mean tradition was veering away.

27 thoughts on “So Long Sola and Solo Scriptura”