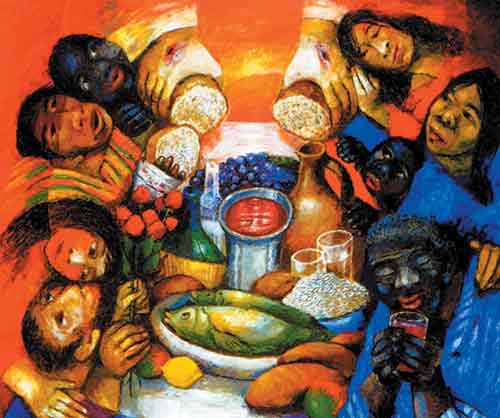 The language we use, the words we choose, form lenses for the reality we are talking about.

At the Sacra Liturgia conference in London on Tuesday last week, Cardinal Robert Sarah, Prefect of the Congregation for Divine Worship and the Discipline of the Sacraments, asked that priests begin presiding at the Eucharist ad orientem, that is, facing east rather than towards the congregation, and suggested that they make the change on Advent Sunday.

The logic of this all-face-in-the-same-direction approach would have the Pope (who has always faced across the altar in St Peter’s towards the congregation) continue to face east, ad orientem, and the congregation would turn their back on the Pope, also all facing east (St Peter’s is ‘occidentated’ – the building faces west). Some scholars argue that this is precisely what people did in the past in that building.

Versus populum (towards the people) is contrasted with ad orientem (towards the east). I suggest abandoning the term versus populum because, much as we can find God in one another, it prejudices that the focus is on the people. It is not. The focus is on God. And God’s table; God’s altar. We are all – presider and gathering community – all gathered around God’s table. Hence my coining in circuitu altaris (around the altar; in circuitu mensae around the table).

The General Instructions of the Roman Missal (GIRM) 299 (binding on the good Cardinal) has:

The altar should be built apart from the wall, in such a way that it is possible to walk around it easily and that Mass can be celebrated at it facing the people, which is desirable wherever possible. The altar should, moreover, be so placed as to be truly the centre toward which the attention of the whole congregation of the faithful naturally turns. The altar is usually fixed and is dedicated.

In other words, there may be an excuse in inherited buildings if the altar is against the wall, but, in new buildings, one must be able to “walk around it easily”. And Mass is “celebrated at it facing the people (versus populum), which is desirable wherever possible.”

My terms, in circuitu altaris and in circuitu mensae, best express the point of the GIRM that “The altar should, moreover, be so placed as to be truly the centre toward which the attention of the whole congregation of the faithful naturally turns.”

[Church buildings that do not have the altar fixed and dedicated is another discussion].

Following the comments by Cardinal Robert Sarah, Cardinal Vincent Nichols has written to priests in Westminster diocese discouraging them from celebrating Mass facing east and reminding them that Mass was not the time for priests to “exercise personal preference or taste” [another worthwhile discussion].

On Friday I suggested it would be interesting to watch the reaction of Pope Francis. We didn’t have to wait long. Pope Francis had a meeting with Robert Sarah on Saturday.

Fr. Anthony Ruff expresses it well (read the whole post at that link):

As you’ve seen all over the internet, the Pope slapped down Cardinal Sarah quite strongly, with only a bit of face-saving spared him (as if he had been misunderstood – yeah, right). Now we know what the Saturday meeting between Francis and Cardinal Sarah was about.

No new directives for ad orientem celebration this coming Advent.

More significant, it seems to me, is the phrase “it is better to avoid using the expression ‘the reform of the reform’” – not least because it is an expression Pope Benedict XVI explicitly approved of in his introduction to Alcuin Reid’s book The Organic Development of the Liturgy.

So I gather that the Pope hadn’t asked Cardinal Sarah after all to begin studying a reform of the reform, as he claimed the Pope had done in April.

There is more reflection on layout in this site’s tag architecture.

3 thoughts on “Around God’s Table”