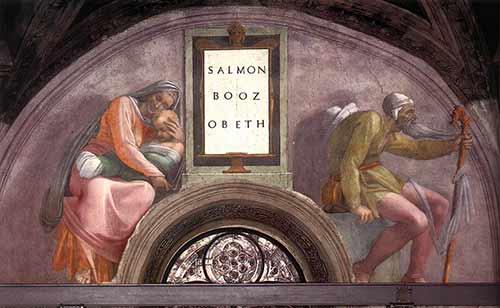 Aram: Matthew is using the Septuagint (Greek LXX, rather than the Hebrew) of 1 Chr 2:9 where the son of Εσρώμ is Αρὰμ.

Matthew is following the genealogy in Chronicles which goes: Hezron – Aram – Aminadab. Luke 3:33 has an extra generation in there: Hezron – Arni – Admin – Amminadab. We are looking at Matthew in slow motion (not Luke), so we need not be particularly concerned about this here. We can note the Luke issue here – clearly it is of concern for those who claim historical veracity of these genealogies. But let’s leave this there, and return to Matthew.

Nahshon – “According to a Jewish Midrash, he was the person who initiated the Hebrews’ passage through the Red Sea, by walking in head-deep until the sea parted.”

Rahab – the second woman mentioned in Matthew’s list. We have to ask: why is Matthew adding women to his list of ancestors where descent is described as sourced in the males? And why these particular women? Joshua 2 introduces Rahab the prostitute who helps Joshua and the Israelites in conquering Jericho. I can find no non-Matthew biblical reference to her marrying Salmon. Some are so scandalised by this non-Israelite prostitute in the story that they attempt to argue she was not a Canaanite but an Israelite, and that she was not a prostitute but a ‘widow’ or an ‘inn-keeper’ or a ‘trader in flax’. Others, similarly so scandalised by her place in Matthew’s genealogy, argue this is a different Rahab (there is a difference of a letter – nothing new we’ve noted in our slow reading):

This fact alone [her ” dissolute and diseased condition”] – quite apart from the Laws for-bidding marriage with members of other races – makes it unthinkable that either Salmon, a prince of the Royal line of Judah, would even have considered marriage with such a woman, or that his comrades in arms would have allowed him to do so when they themselves would, most likely, be the very ones to suffer sudden destruction by God for condoning such a deliberate transgression of God’s commands.

But, why would Matthew insert a random woman, by name, in his list of men – and that be a specified name of a person that we’ve never encountered previously? The argument, much stronger, is that Rahab, in Matthew’s list, is the foreign prostitute, and that this is highlighting, in Matthew’s overture, even in the context of Jesus’ roots in Israel, his connection with foreigners and his connection with sinners and the dysfunctional.

Clearly, following this ruling of God – King David himself, the great-grandchild of the Moabite Ruth, is excluded from the assembly of the Lord!

But wait – there’s more! The story of Ruth’s forwardness with Boaz looks like a story of seduction. So the women in Matthew’s genealogy are all suspected of sexual immorality. Tamar seduced Judah, her father in law and produced Perez; Rahab was a prostitute and with Salmon produced Boaz; Ruth sneaked in to sleep with Boaz and produced Obed.

5 thoughts on “Matthew in Slow Motion 4”